The holy grail for most tech enthusiasts is home automation, the ability to control one's environment from anywhere in the home seamlessly and easily.  The promise of this technology lies in the Z-wave communications standard adopted by more than 100 companies, including Intermatic, who makes the Home Settings lines of home automation products.

Z-wave is a open communications standard which uses mesh technology to extend the communications range between devices, meaning that Z-wave devices also act as repeaters, extending the normal 50 foot range of these devices to an entire home or building.  Also, the programs stored on one device can be accessed from other devices in the mesh network.

Unlike previous generation home automation products such as X10 and UPB, Z-wave devices communcate wirelessly and bi-directionally, allowing the modules to be programmed and sychronized remotely.  In our test environment, we wanted to set a "TV Scene" in the living room where the lights next to the couch dimmed, and those would reflect into the TV turned off completely.  To achieve this, we completed the following steps: 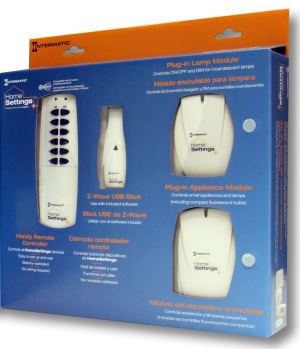 Once the scene is programmed, you can press ON or OFF to instantly turn the scene on or off, or you can hold ON to slowly increase the brightness of all lights in the scene, or hold OFF to slowly dim them.   Also, once a "scene" is programmed on one controller, the entire scene can be accessed from another controller via the mesh network.

In less than 30 minutes after opening the packages, the first step in our home automation dream was realized, intelligent lighting control in the living room.  We liked what we saw, but it just wet our appetite for more.  Stay tuned for more articles on Zwave technology for the home.