In a greener more energy-conscious political enviroment, the Black and Decker EM100B Power Monitor is one of the hottest new home improvement gadgets of 2008, introduced just in time for the holidays, this device provides real-time data on how much electricity your home is using, predicts your end-of-month electricity bill, plus it can isolate the cost of appliances and fixtures.

Installation of the reader on the power company meter was a snap, taking a total of about five minutes, four minutes to read about the various types of electrical meters in use, and then less a minute to physically install. 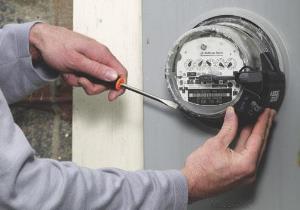 The Black and Decker Power Monitor gets its data directly from the power meter either through the digital port, or for older meters, by counting the revolutions of analog meters.

A flag on the device tells power company officials that the reader is completely passive, that it reads data only and does not in any way alter the data.

The only tool needed to complete the installation was a screwdriver to tighten the ring which gripped the Black and Decker device to your power meter.  Then, press the reset button, and viola, data begins transmitting to the remote.

In another minute I was in the house, setting up the remote device.  Again, I spent about five minutes, three minutes reading about all of the various tiered rate plans that the device supports, another minute to phone the power company to find out what my rate plan was (I was too lazy to find my bill), and then a minute to setup the remote.  In my case, I have a two-tiered plan, one rate for the first 2000 kilowatt hours, and another rate above that.  The device supports up to five tiers, plus it also supports rate plans based upon time of day. 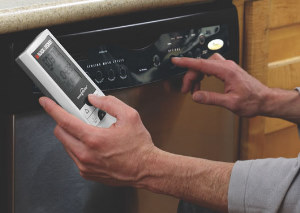 Instantly, the device told me that I was spending 11 cents per hour for electricity at my current rate of usage.  I looked around the house, daytime, no TVs or lights on, FOUR desktop computers and three laser printers on, plus dozens of blinking LEDs in the home entertainment area.  Based upon this level of usage, it predicted my bill at $80 for the month, but I knew it was going to be closer to $200, so I decided it was time to play.

I pressed the TARE button to isolate a device, and turned on the 65" TV and the DVR.  Hmmm, they only costs 3 cents an hour to operate.   Last week, I went to the movies and came back to discover that I left all of the downstairs lights on when I left, shaming myself up a bit for not being more energy conscious (or at least cost-conscious).  I set the remote and turned them all on -- they cost 3 cents an hour, less than a dime during the time I was at the movie -- maybe I was a bit hard on myself.

I opened the fridge and waited for the compressor to turn on... 2 cents per hour   I turned on the dishwasher... 3 cents per hour, probably paying more for water than electricity.  Then the big one hit -- the A/C came on... 30 cents more per hour when it is on, which is "often" when it is 100 degrees out, but today, the device said it was only 86 out (the temperature at the outside meter appears on the remote).   After a few hours of collecting real time data, the prediction for my monthly bill was $180, closer to what I expected.

I am still not done playing with this device, and since this is the first time that I have ever had real time energy data to work with, the potential for this product is mind-boggling.  In a couple of cases, it means that I can clearly justify newer more energy-efficient appliances.  When I go away on trips, I can read the device before I leave, and cut everything down to a goal number, maybe 8 cents per hour or $2.00 per day while I am gone, maybe even less.

WHAT'S NEXT?  The BIG ENERGY HOG in my home is clearly the air conditioning system, and for that one, Black and Decker has a new device due out after the first of the year, a thermal leak detector for use around doors and windows.  Also, I am considering doing something with z-wave technology, maybe create a program using data from the motion detectors and security system to control the thermostat, so if the security system is set, it modifies the temperature.  When I figure out how to do that one (in theory, it is a simple z-wave program), I will definitely publish the results online.

For more information on this and other energy saving products from Black and Decker, visit www.energysaverseries.com