For a couple of years now, a standards war has been brewing between Zigbee and Z-Wave for domination of the home automation market.  Both technologies have strengths and weakness and offer hundreds of products that do just about everything in the home.  A new bridging product from BuLogics, however, may provide Z-Wave with a key missing Zigbee feature, which levels the playing field between the two technologies and could mean survival for both.

The Zigbee alliance has long been making inroads with utility companies to integrate with the smart grid and help consumers intelligently reduce home electric loads during peak times of day.  Currently, most consumers pay fixed utility rates and are protected from hourly rate spikes that utilities sometimes pay for wholesale electricity.  As regulators unravel local utility monopolies and allow more competitors in each market, new utilities want to pass on actual costs to consumers and give them the ability to control their own rates by reducing power during peak times.  In the end, a modern consumer who conserves during peak times will end up paying less than those who are "averaged" with other users. 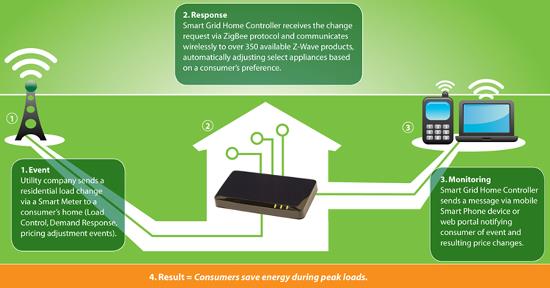 The Bulogics Smart Grid Controller, therefore, receives Zigbee signals from your local utility indicating the current cost of electricity (typically updated every 15 minutes), and then begins to send signals to your z-wave enabled devices to begin to conserve.  During the next hour, the tempreature on your thermostat will change, maybe your refridgerator will be raised a few degrees, lights and TVs will turn off or dim, computers and other appliances will go into sleep mode, your Roomba vacuum cleaner decides to wait to begin the next vacuum cycle, etc.

Since Zigbee uses power lines for data transmission, they have been the leader in making smart homes speak with the "smart grid" to more intelligently and efficiently control your power useage.  Z-wave, on the other hand has focussed almost entirely on providing low-cost consumer-friendly after-market home automation.  For some time, z-wave enthusiasts have suggested that power utilities would send signals to z-wave via the internet as a work-around to the developing zigbee smart grid initiatives, but the BuLogics product makes it unnecessary for the utility company to support two standards.