At Demo 2006 in Phoenix Arizona, the creator of the Furby announced the birth of an artificial life form called Pleo, welcomed into the world by 700 white-shirted venture capitalists singing "happy birthday to you." The company behind Pleo is Ugobe, lead by executives from the toy industry and luminaries from the film and animation world.

While playing with the Pleo prototype, I was drawn to thoughts of Dino, the baby pet dinosaur in the Flintstone family. Learning the Santa Claus secret early in life, I knew that Dino was out of place in the Flintstone home, because dinosaurs were long extinct before man came to rule the world. Also, I felt that if we ever did encounter a real dinosaur, it would probably rip us and our homes to shreds, not exactly the best candidate for a family pet. And, while Dino couldn't help me to suspend reality, I think Pleo might just do the trick. 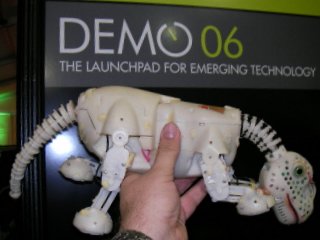 Equipped with more than three dozen sensors, including stereo sound, touch panels, and infrared, Pleo requires no remote control and is free to interact with his owner and environment. There's no on/off switch â€“ Pleo is activated when you talk to it, touch it and react to it 's just like a real life pet.

Over time, Pleo will bond with its owner, and even learn new behaviors based upon it's environment. Pleo can convey emotions, is aware of himself and his surroundings, and evolves as it experiences the world.

The designers of Pleo wanted him to be as small as possible, a tabletop toy if possible. Therefore, Pleo knows about edges, and appears frightened when looking down over the edge of a table. Also, Pleo knows when he is about to step onto a dinner onto an uneven surface, or onto your dinner plate, and tries to find another way to go.

Equipped with an SD card, Pleo's software can be upgraded or modified by users. The designers are aware hat some hacker-types might even want to breed Pleo with Tyrannasaurus Rex traits, and that appears to be OK with them. Unlike Sony's closed-source attempt to deliver a robotic dog pet, Ugobe is creating an open SDK (software developer's kit), and they believe that opening up the programming, even to the most bizarre or quirky ideas, will only help to expand the Pleo lore.

Pleo will be available in the third quarter of 2006, in time for the holidays, and will MSRP for $199. For more info, visit www.ugobe.com.